The farm Les Transhumances is located near COLMARS-LES-ALPES in the oriental part of the ALPES DE HAUTE PROVENCE, in the heart of the UPPER VERDON VALLEY. This valley leans against the ALPES' range (Mont Pelat: 3051 m - Tête de l'Estrop: 2961 m) and, facing south, opens on the Provence and French Riviera.
COLMARS-LES-ALPES, an ancient border town nested in a mountain bolt, is famous for its fortifications: surrounding walls, forts of France and Savoy - a legacy of Vauban.
Because of its geographic situation, its long history and its old monuments COLMARS-LES-ALPES has received the following labels: "Station verte de vacances", "Village et cité de caractère" and "Commune du Parc National du Mercantour". The village is a privileged access-point to the northeast sector of the MERCANTOUR NATIONAL PARK. 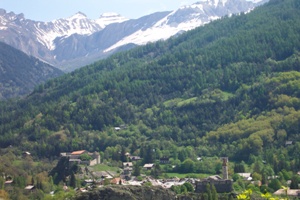 As a whole, the UPPER VERDON VALLEY is a rich touristic area. It is well known for its downhill skiing resorts of VAL D'ALLOS (connected with PRA LOUP in the ESPACE LUMIÈRE) and its cross-country skiing resorts of RATERY and LA COLLE SAINT MICHEL. And the south end of the valley gives access to the famous GORGES DU VERDON, also called "Grand Canyon du Verdon", with its "corniche sublime" and its numerous viewpoints on vertiginous cliffs.